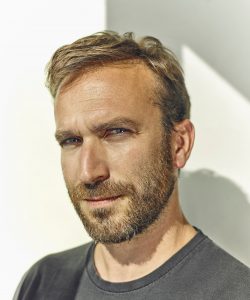 Raphael Lacoste is one of the most prolific and renowned concept artists in the digital space. Lacoste was the Art Director at Ubisoft on such titles as Prince of Persia and Assassin's Creed. Winning two VES Awards, in February 2006 for his work on the "Two Thrones" cut scene from Prince of Persia and in 2017 for his work on "Assassin's Creed Origins". Wanting to challenge himself in the film industry, Raphael stepped away from the game industry to work as a Matte Painter and Senior Concept Artist on such feature films as Terminator Salvation, Journey to the Center of the Earth, Death Race, Immortals 2011, Repo Men, Jupiter Ascending... As of 2009, Raphael has returned to the video game industry, working as a Senior Art Director for Electronic Arts Montreal and Ubisoft, as Brand Art Director on the Assassin’s Creed Franchise. After working on many of the most successful Assassin's Creed Titles, Raphael joined some of the original creators of the Franchise at Haven Studios inc as Senior Art Director. Today Raphael in his own practice continues to create exceptional and master environments, moods, picture composition, and lighting. The main inspiration of Raphael Lacoste stems from landscape painters such as Jean-Pierre Ugarte, Caspar David Friedrich, Albert Bierstadt, and Ivan Aivazovsky. Raphael’s artistic technique, in the same vein as Romantic painters, centers on his ability to create beautifully melodramatic atmospheres, but transports the viewer to another world. 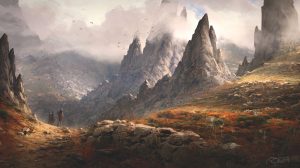 How would you describe your artistic style?

Difficult Question, I consider myself as an Illustrator, digital painter, I have some influences with romanticism but also Science Fiction and Fantasy.

I love to create immersive pictures which can lead to mystery and leave open questions. An image is more interesting if you want to spend time looking at it, wondering about the world and the universe you see and want to explore. An image that triggers curiosity and awe is always more captivating.

What do you think the importance of Art History is in the NFT space and your work?

I am glad my older digital pieces and the new creations I did this year got recognition in the NFT space and validated as Fine Art pieces as well.

This is great news for digital artists who will be more able to make a living of their own craft  and not depending on a middle tier management.

Also, Considering Digital Art as a valid Artistic discipline is really helping us to gain credibility as digital artists, this is a big step for us and the future generations of artists in this field.

Who and what are your key influences?

My influences span from traditional art to photography, digital art and movies visual effects. I am not restricting my inspiration in a single field and like any living artist of the 21th century, with a minimum of culture, we are gathering inspiration from many fields.

As a Kid, I have been influenced a lot by animation movies like Time Masters, Gandahar  (french director René Laloux) but also by the Japanese Masters like Myiazaki. Science Fiction movies are also a great influence as I love to build worlds and creation is to me a great challenge, more than pure 're-creation' . In my art, I also have been inspired by traditional painters and romantic artists such as Albert Bierstadt, Ivan Aivazovsky and of course Caspard David Friedrich, Jean leon Gerome etc... Photographers like Greg Girard, Steve McCurry but also Gregory Crewdson are some of my most recent influences in terms of cinematography and lighting.

Could you talk us through the process of making? What’s going on in the image?

Usually my work will start with a very simple sketch, I like to find the right composition first. Drawing a few lines on paper, it can be a thumbnail  . If the concept and rough idea works as a quick line art, it will be a nice piece with all the final elements, I can use 3D also for a base and a render, some digital painting and elements of photos I have taken from my personal image reference bank.

I find it particularly interesting to mix medias, starting with a traditional drawing (which I consider like a note) and bringing the concept to the next level with mixed digital techniques.

What’s the overall idea/concept that you try to get across in this NFT and also in the rest of your work?

I would say like in almost all my creations, I like to explore worlds and let the spectator imagine stories or immerse themselves in a universe that I like to create. This particular piece 'Sentinels' is for me an image of a fallen world that has known glory or power, erecting  monuments against an already epic nature backdrop. Glorification of nature, awe inspiring monuments are certainly an homage to romanticism and the expression of emotions through a painting.

This civilization will have changed, or disappeared and leaves behind these somewhat pretentious or imposing architectural feats... it's up to us to imagine what happened to these people and what will become of these remains...

What’s the relationship between the subject and the aesthetic style of your work?

I learned illustration by drawing inspiration from romantic painters. There is clearly an attachment to light, composition and the attraction of the grandiose, the fascination for nature and the spectacles it can offer us, as much in their threat as in their comforting beauty. I always had a focus on details even if the composition is my first goal, as well as the execution of an immersive atmosphere. I try to balance the execution with an interest for realism while making creative choices of stylization and composition, playing with scale, atmosphere and leaving enough room for  imagination. The composition has to be memorable and impactful as Atmosphere leaves enough mystery for the viewer to have room for open questions and imagination.

How did you get into NFTs?

Like many CG artists, I discovered NFTs at the end of 2020, and I started producing them at the beginning of 2021. It's a very young universe with rules that still seem very vague and to be determined. Some Artists had a lot of success very early on, others were there just to try and are now out of the scene.

Personally I'm here for the long run and curious to see how this field will evolve and allow CG artists to have more freedom.

How do you see the relationship between NFTs and concept art and the traditional art world developing over the next few years?

The combination of all these disciplines is very interesting. Concept Art has often been considered as an 'art of production', as 'industrial', a craft and less an artist's discipline.

Depending on the works or the styles of creations, however, I think that we can definitely consider pieces of concept art as masterpieces and creations in the same way as Traditional art, especially with 1/1 NFTs.

We'll see where it takes us, but I think this is where NFTs have an interesting role to play in giving credibility to digital art and moving Traditional art towards the digital world and its opportunities.

Who are your favourite artists in the NFT space?

Difficult to answer, there are a few. like Reuben Wu, Sparth, Adrea Chiampo, Dangiuz, Marc Simonetti, Daniel Liang only to name a few.

What are three words that you think will define the world of NFTs in 2022?

What do you want the viewer to take away when looking at this NFT?

I wish the viewers to escape in this world and find their own story. 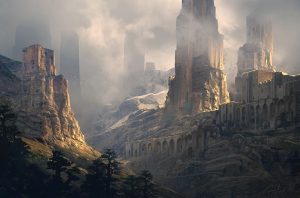